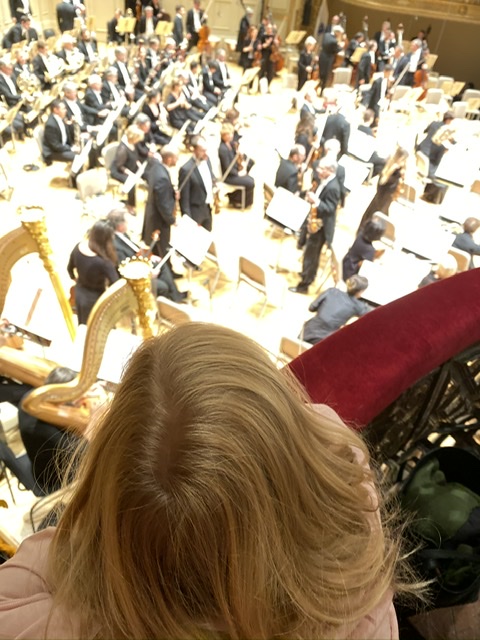 It was amazing -my four year old daughter asked to go to a “serious” concert! As a professional musician I was worried that all she wanted to do until that day was watch episodes of “puppy dog pals,” but it turns out music has been working it’s magic behind the scenes. She did after all compose her first serious piece on the piano at 6 months, but then after she turned two the interest in music was won over by magnatiles, feeding squirrels and pretend games.

The day before we went to see a special Boston Youth Symphony children’s program and it was great: Magician was the host, the conductor popped out of a giant gift box, there were glow sticks. Of course it was a great experience for many families from toddlers to school children. My daughter listened and was frustrated by all the chaos, little kids were not listening and respecting the music and one even wanted her glow stick! During the petting zoo she also seemed more interested in the cookies that were offered rather than the drum demonstration, so I thought all was lost. But I was wrong. That eventing she asked to go to a “real” concert with older kids and adults, where we would have to “talk like fishes” mouthing our words. The next morning I checked again and she was certain she wanted to go to a “serious” concert so luckily in Boston there are a lot of options. Turned out that afternoon the Boston Philharmonic Youth Orchestra was performing a great program with Inmo Yang playing the Prokofiev 2nd Violin concerto with Wagner’s Meistersinger Overture in the first half which I thought would be just serious enough. I played excepts of the music for her on YouTube, and she said she’d love to hear them, so we were going!

We arrived at the hall I just minutes before the start and were very lucky to run into a family friend who gave us amazing tickets: just above the orchestra on the first tier, in the front row and directly above the conductor -which meant we really did have to be on our best behavior!  I was nervous. The conductor was actually the fabulous Ben Zander, whom I grew up watching conduct since I was a little girl. He started with a conversation about the music and soon the Wagner began. My daughter was all ears, the horns and trombones raised the volume to new heights and goosebumps ran down my arms -was she going to be overwhelmed by the sound? She also had some goosebumps but it was from excitement! Next was the violin concerto, she loved and hand conducted the now familiar first movement, but the second slow movement was “boring” so I dug deep down into my bottomless “never-full” bag and found a pen so she started drawing on the program what she felt. She drew happy stick figures all connected with a circle. Then the third movement started and the next page of the program was encircled with vigorous strokes. At first I thought it was just scribbles, but when I asked her, it was a “hurricane!” She was really experiencing the music and making it into art. Once the piece was over and the violinist played an encore, we were so proud, she loved it and did such a great job listening. “I’m hungry mommy.” Great, what a nice experience, “do you want to go home?” -“No!” She said, “I want to stay for the second half.” I asked if she was sure she wanted to hear a “serious symphony by Mahler” and she said “yes!” We got one of everything at the snack bar, cookies, pretzels and even potato chips “for mommy and daddy.” We ran back to our seats and were very quiet, listening and enjoying watching the musicians through the basket woven cracks of the balcony. The Tchaikovsky Romeo and Juliet overture followed by Mahler 3rd Finale and it was fantastic. Not only did my daughter stay for the whole concert, but she loved almost every minute of it and wanted to thank the conductor after. It was great, there was a fantastic moment -Ben told my daughter that he remembered me when I was just a little older than her, and my daughter told him that she was wearing a dress I used to wear when I was little that my mother crocheted. It was life coming full circle through the power of music and I didn’t expect it.